The Intricacies of Building Apps for Bharat - Open Discussion 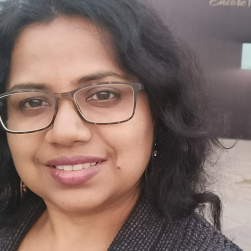 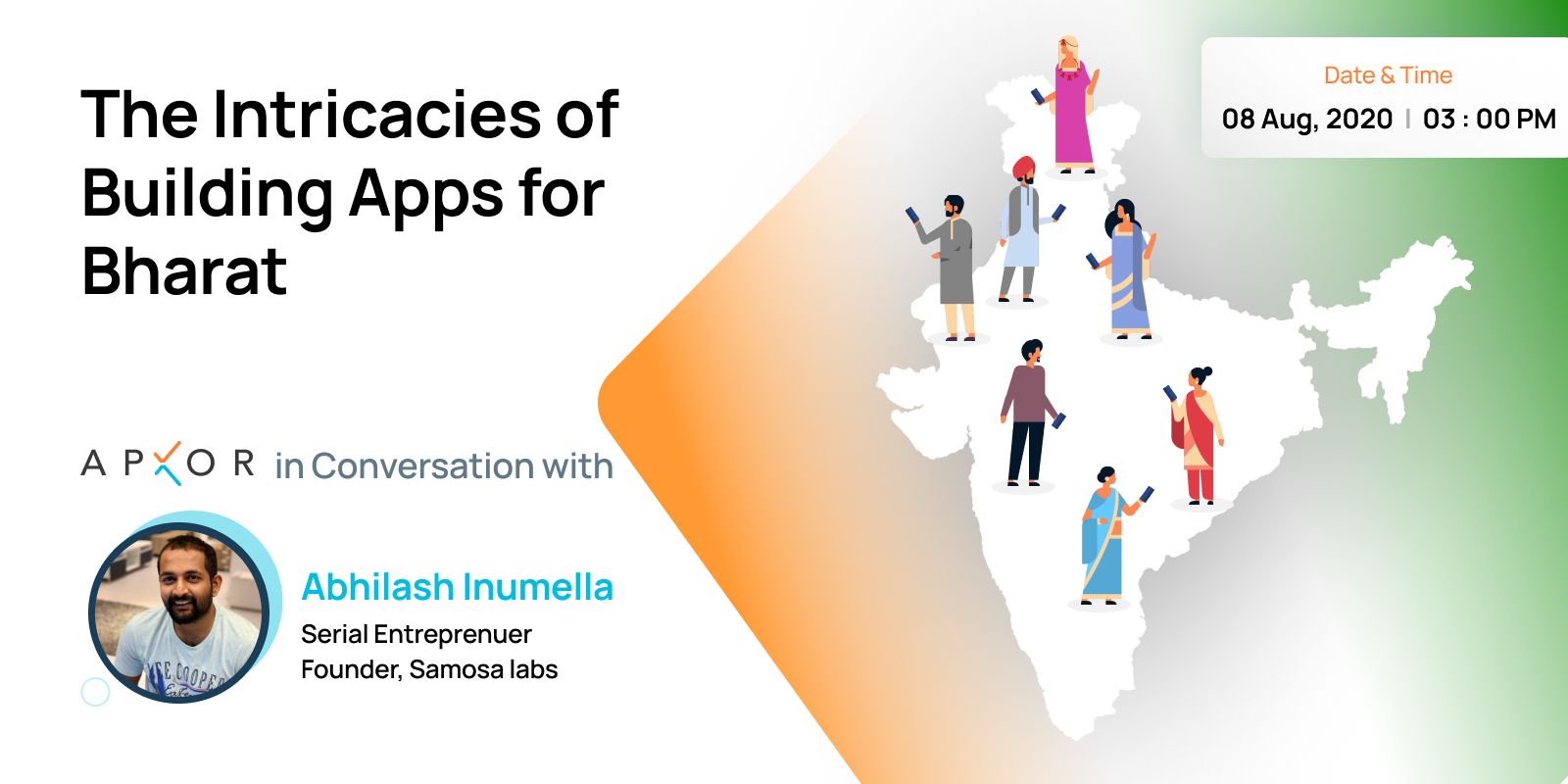 When we, at Apxor, thought of doing a session on ‘Building Apps for Bharat’, we couldn’t think of a better speaker than Abhilash Inumella. Abhilash is a serial entrepreneur, with a very interesting journey in understanding the Indian diaspora, and building an app which reached every nook and corner of rural India in the ‘pre-Jio’ era. His short video sharing social app cheekily named ‘Samosa’ gathered millions of followers and enabled Abhilash to secure funding from Sequoia and Xiaomi.

Apart from being an entrepreneur, Abhilash has also great experience of working with large MNCs like Facebook and Google. Abhilash says that a lot of his world view about products developed at Facebook. “I joined Facebook pre IPO and there was a lot of action going around in Facebook at that time. What I saw there was a lot of engineering and product driven growth. Facebook focussed less on boosting the top line with activities like marketing, and a lot more on engineering and improving the bottom line, which leads to retention. Similar learnings I had applied at Samosa. We focussed a lot of efforts on engineering. We acquired 10 million users, before spending even a penny on marketing. Out of the 7 member team, 6 were engineers, and one was focusing on the content.”

Opportunity for apps which are being built for Bharat

Abhilash says, Whatsapp has 400 Million MAU, YouTube has 300 Million MAU, Tiktok had 200-240 million MAU when it was around. The sheer scale of the opportunity is humongous, and it’s only going to grow, as more and more people are going to come online. It’s going to scale to 600 - 700 million users in the next few years. So, building for Bharat is undoubtedly going to be huge.

With regards to advice for budding entrepreneurs on what kind of apps could be built for the Indian audience, Abhilash has innovative ideas. He suggests that entrepreneurs could figure out offline/real-life behaviors. Some top of the mind business opportunities he suggests are apps for marriage brokerages, astrology, collecting funds for festivals (like Ganesh Chaturthi). A lot of these offline behaviors will come online eventually, especially considering the pandemic is what Abhilash strongly believes.

Breaking down the success of TikTok

"To talk about TikTok is to talk about our culture. What gives a product like TikTok growth, is to be the epicenter of culture all the time. There was initially a lot of backlash on TikTok videos, but they slowly became a norm as TikTok became the epicenter of our culture, and they did this consistently with every culture and subculture in India, with the help of their algorithm.

Abhilash emphasizes on having a healthy UGC for growth of apps, “The user generated content can be anywhere from 0.5% to even 8%. So initially if you have the right tools to help the users upload their content, that will give you your 0.5% of content to begin with. Then if you have camera tools, music tools, filters you can increase your UGC to 1-2%. As your DAU keeps on increasing, the UGC scales. But if you want to go past the 1-2%, you have to become the epicenter of the culture, like TikTok.”

To solve the problem of cold start (i.e; users are not ready to put their own content unless there is some healthy content on the app already), Abhilash says that the standard practice taken by almost all apps is to put up 10000 + pieces of platform generated content initially, seeing which users will start uploading their own content.

Abhilash also talks strongly about the need to police the content which is being uploaded onto a platform. He advocates that the platform itself has to take responsibility to put checks in place. In the case of Samosa, the content is checked as soon as it is uploaded, and there are automated checks for pornography, hate speech etc.

It is extremely important, as the online world is like a society, and it should have its own security, not just in terms of data, but in general.

When asked by the audience about what is the tech stack for companies like TikTok, Abhilash gave a detailed description.

Take a look at the below video to know the secret sauce behind these short video giants.

According to Abhilash, for the app to scale, the system should be a closed loop system.  The reason being you will lose more users than you gain. Major indicators of this would be time spent and the amount of content that is flowing into the system.

In any system, the major work is data collection while only 10% is the algorithm.

Abhilash defines four checkpoints to understand if you are monitoring correctly.

Checkpoint 1 - are you collecting all the signals from the client? Are you tracking all the impressions and interactions?

Checkpoint 2 - have you created a system in the backend to process this data?

Checkpoint 3 - have you designed an algorithm that runs on top of this data, to serve a feed to your user?

Checkpoint 4 - what is the time spent by the user, given an algorithm?

You should not debug your algorithm when your data collection is wrong. If the checkpoints are proper, this will not happen.

Impressions is one of the most critical metrics to track. If your app needs to track the ratio of no. of impressions to no. of likes, but if you optimize only for likes, then you won’t be able to get the right results and optimize your feed properly. So no matter what you do with your algorithm, if the tracking is not right, the problem can’t be corrected.

Check out what the 'Good metrics to measure retention in Content Apps' are.

The formula for Samosa’s growth engine

Abhilash shares a simple process which was the basis of their growth engine.”In terms of Samosa, we used to sort the content in terms of shares to impressions ratio. If the ratio was high, it used to be shown on top of the feed. Users used to share this content in their Whatsapp status with the Samosa logo. Looking at the logo, their connections would download the app. We got 10 million users with this simple process.”

Recently Reforge popularized the concept of ‘Growth Loops’, which could replace the traditional AARRR funnel usually thought of as a representation for product growth. The formula of Samosa’s growth engine totally resonates with the concept of Growth Loops, even before the concept existed. But surely it is a winning formula.

Abhilash says for Samosa they optimized the home feed by caching videos on the Android to improve the time spent. They also improved their impressions and interaction tracking mechanisms to improve their time spent. Improving their home feed led to retention.

Talking regarding ideal home feed Abhilash says, “ In a UGC system there should be a balance between giving distribution to new content and existing content. The class of  explore and exploit algorithms can be used for this purpose. In the explore phase you show them the new content and exploit phase you show them trending content, or show them what they like a lot. When you let the user explore you get two signals, you get a signal on how the new content is doing, and you also get a signal on what the user’s preferences are, what his affinity is.”

Here is a tried and tested method to "Increase user activation by optimizing home feed".

When asked about benchmarks in the short video sharing app industry, Abhilash quotes an interesting anecdote. “I was in China for investment. The investor asked what your D180 retention is like. If it's around 15% I will write a cheque right now without asking any other questions. If D180 retention is 15% every investor on earth will be ready to write a cheque for you.”

He also cited that the standard benchmark for time spent for Tiktok is 1 hr 20 min average in China, and in India it was 30 mins.

What’s next for you

These are some of the interesting insights shared by Abhilash.