Feature Adoption and How it Drives Growth

Whether you are launching a new feature, or want to bring under-utilized features to the forefront, understanding feature adoption is critical for your app. 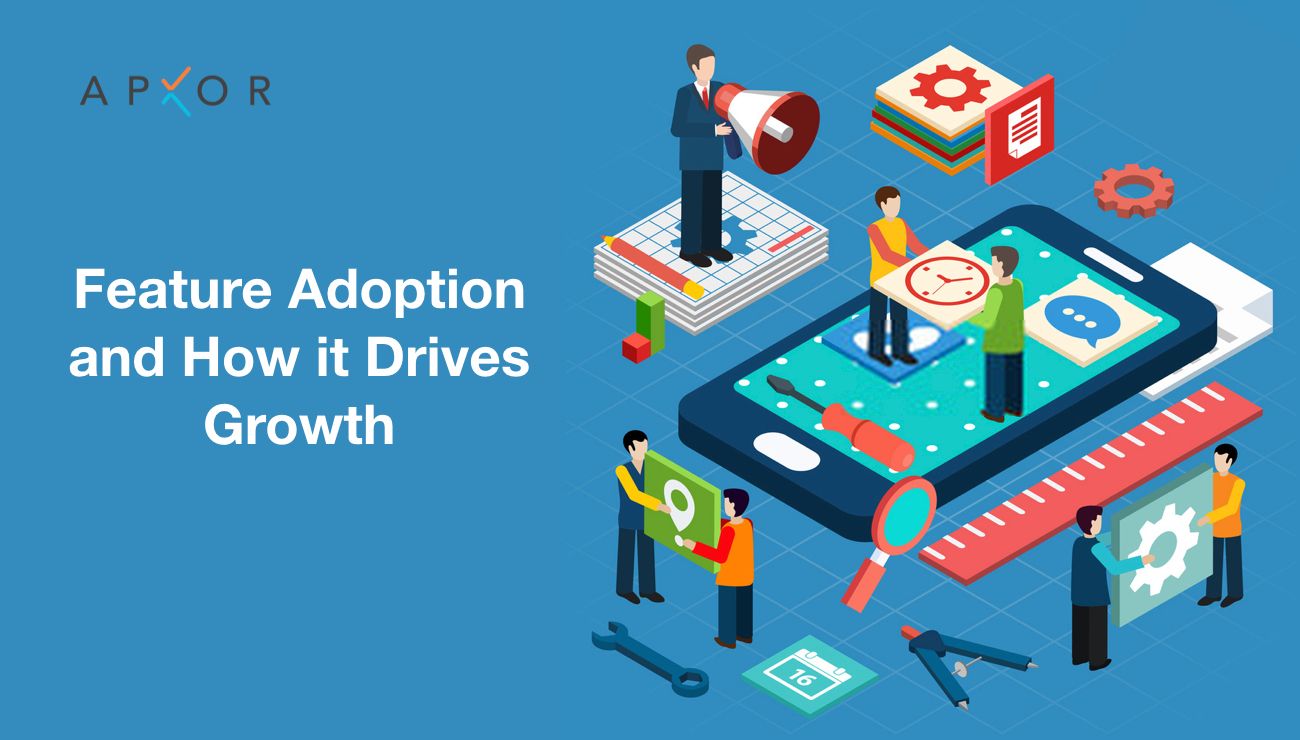 What is feature adoption? How does it affect your growth?

One of the best ways to upgrade your product is to launch a new feature. Many factors can influence the need for new features. Product managers usually have loads of new feature requests from their users. They also double down on their data to understand how to improve the product experience for their users. Products also need to consider what new features their competitors are releasing and keep updating themselves.

However, the biggest gap in feature releases is in understanding how the new feature is being consumed, which entails the following factors:

What is feature adoption?

Feature adoption means introducing a feature to a user to discover it in the proper context and use it repeatedly. When a feature is presented to a user the right way, it becomes easier to consume, understand and use as intended, making the user a power user.

Why is feature adoption significant?

Rolling out new features is indispensable for products in today’s day and age. But it is estimated that only 20% of app users use the app entirely. Here lies the opportunity to showcase the app’s features to the remaining 80% dormant users. Encashing this opportunity segment can be done only by measuring and improving the adoption of the features launched onto the app.

On the flip side, the creation and launch of new features heavily tax multiple teams. If the users aren’t adopting a new feature, it delivers a severe blow to the product development cycle.

Hence, it is critical to understand the ROI of any app feature. It lets the product owner know if the feature works well or is grossly under-utilised, leading to their own product decisions. Furthermore, feature adoption plays a crucial role in prioritising or deciding to sunset a feature from the user’s app experience.

It might sound like a lot of effort to be put in, but this is where contextual smart nudges come into the picture. Plug and play tools like Apxor let you swiftly create and implement them on the fly.

How can the feature adoption experience be visualised?

A feature can be introduced to a user via multiple channels. For example, app marketing teams share the new feature announcement to the users by reaching out to them through an email newsletter, an app push notification, SMS announcements to grab user attention.

Once a user knows that a particular feature exists and launches the app with that intent, there is vast scope for in-app feature announcements.

Depending on the kind of feature it is, the means of feature adoption can change.

For example, for a one-time use feature like Privacy settings, Night mode setting, etc., you can use a simple tooltip or a coach mark to direct the user to that particular settings screen, when required and let them choose from the options, works well.

For more extensive features that add abilities to the app like Bill payment, Referrals etc., showcasing a contextual and personalised tutorial is good. The tutorial can be created via a cascading view of smart nudges like coach marks, tooltips, passive nudges or pop-ups. It ensures feature adoption as the user is in the right context to try the feature out while using the app.

The road to getting a feature adopted

There are multiple contexts in which a feature needs to be showcased to a user. And for different contexts, different types of methods can be used. Here are a few of them,

A tutorial on how to use a new feature or understanding changes in an existing feature helps significantly.

If the app has basic flows leading to the new feature, feature tutorials can sometimes be hardcoded into the app during the latest feature release. However, typical hardcoded tutorials tend to skim over the feature in a cookie-cutter template which is not ideal for complicated user flows or contexts. In addition, they usually take a lot of developer effort to build, ignore user context or showcase way too much information at once, overwhelming the user. So product owners must use them at their discretion.

Another way to showcase feature tutorials is by using in-app messaging tools that work on the fly. Such tutorials can be dynamic and flexible, often incorporating user interaction patterns, time spent and user behaviour and adjusting accordingly to make them contextual and helpful. This method enhances your app’s user experience immensely.

‍
Look at this case study of how the Samosa app used Apxor to contextually showcase a tutorial of their dub feature to their users.

Showcasing a feature to your users right when they need it elevates their app experience. For example, based on the usage patterns of users who chose the night mode while reading a news article, the night mode feature can be contextually recommended to users who are showcasing similar behaviours.

The same can be applied to necessary but often hard to find features. It lets you reach out to your users right when they need help and address their concerns in real-time.

Here’s a case study of how MyTeam11, a fantasy sports app, launched a contextual walkthrough using Apxor to improve conversions for the PhonePe wallet. So, the MyTeam11 team decided to launch a feature discovery campaign to contextually nudge to drive attention to the Phone Pe wallet feature and the benefits of using it.

Context set by MyTeam11 here was, when users come to the payment page and click on add cash, the nudge is to be displayed. Teams can set contexts of such depth using the Apxor dashboard very quickly. Check out the gif here.

Passive nudges allow you to subtly showcase a feature to users without disturbing their app experience. It is instrumental when you have soft-launched a feature and want to understand how users gravitate towards it. As an added advantage, the ability to launch such passive nudges on the fly lets you be very flexible and experimental in getting your feature adopted.

What tools do you need to create smart nudges?

Smart nudges can be created by hardcoding them in the app during release or using third-party messaging tools that help you create in-app communication or behavioural cues on the fly.

Detailing the use case

Here, the product team ideates the scenario in which a particular nudge needs to be shown to the users. It helps narrow down what needs to be communicated, to whom and under what conditions. Additionally, it sets the expectations and goals for the action.

The display conditions nail down the conditions in which the nudge should be displayed by broadly setting the ‘when’. It includes the time period for the campaign to be live, repeating the nudge during the user’s journey in the app or even down to auto dismissing it after it is displayed.

Choosing the audience to target lets you direct the historical behaviour of the users and any properties they must conform to.

It is easiest understood with this example. In a video content app, you can choose to show the nudge to users in Delhi on the 4G network (User and session properties) who liked at least four videos in the Travel category (Event and its attribute).

The next step would be fixing the live behaviour of the users. These conditions would be evaluated in real-time, based on which the app would show the smart nudges to the selected users.

For example, in an e-commerce app, if the user viewed three products and is spending an idle time of 20 seconds on the search results screen.

The design of high-quality behavioural cues is supposed to feel immersive, intuitive and should gel well with the existing theme of the app. Details like the colours, button configuration and even actions on clicks should be set here. Usually, the product and design team collaborate in creating a design that works best for your users in a particular context.

Product owners should test the created nudges on multiple devices with different resolutions in various environments. Beta user test groups can be utilised here as well. Once thoroughly tested, it is good to go live.

Once these crucial steps are complete, you can launch the smart nudges to all your users.

Here is a detailed guide to the data driven approach to feature discovery and adoption.

How does feature adoption work in improving your KPIs?

Getting your users to adopt your new feature impacts multiple KPIs, here’s how:

Crafting a personalised and contextual onboarding can set a tone for your users in getting introduced to the app. Similarly, presenting your features to the user the right way lets them experience an AHA moment with your hero features making sure that they get activated in the app. It ensures that your users have understood the feature and have reached their first milestone towards having a long term journey within your app.

While activating a user or getting a user to use a feature for the first time matters a lot, getting these users to remember said feature right when they need it or use the feature repeatedly proves to be quite the challenge. So when feature adoption walkthroughs are created for contextually nudging your users for repeat usage, they can start to make the feature a habit. This way, along with tracking the feature’s adoption, you can also monitor how the feature effectively becomes a habit for your users.

A tutorial of a feature when it is first introduced to a user needs to give the user the information they need to get started without feeling overwhelmed. A good feature tutorial is contextual, personalised and easy to understand. This would lead to improved user engagement with the feature. For example, if the feature requires time to be spent while using it, user engagement can be measured with feature engagement metrics (time); else, its repeat consumption can track how engaging the feature is for the user.

Highly contextual and targeted smart nudges on the fly will genuinely enhance how you get your users to adopt app features.

The context can get as specific as if a user spends an idle time of 30 seconds on a particular screen and does a particular event while being on Wifi, and then a nudge can be shown.

Creating smart nudges for feature adoption gets all the more effortless with Apxor.

‍
Alternately you can drop us a mail at contact@apxor.com for a quick demo.

Apxor uses cookies to enhance your experience. We use these for analytics purpose. By continuing to use our site, you agree to our use of cookies.
Got it